If providing unique labelling solutions was an Olympic event, Label Power would certainly score the Gold with our latest promotional label.

This edition sees the introduction of coupon label technology to Label Power’s ever expanding range of products. In addition we have some important information for anyone considering bar coding and there is a whisper that Label Power are on the move.

With each newsletter we always try to bring our readers a bargain and this edition is no different. We are running out the superb Citizen printers but hurry as there are only a few left.

James Malone and the team at Label Power

Congratulations to the winner of a brand new BP-443D barcode label printer,

Simone Wyndham of Kichi in NSW.

Label Power tops off the year

Rounding off a fine year at Label Power, the company has been acknowledged as one of Queensland’s top 400 companies.

Every year the prestigious listing of the state’s top privately owned companies is compiled by the QBR in association with QUT and accountants BDO Kendalls.

For the first time Label Power joins the 'A' list with household names such as Golden Circle, Zupps and many other great organisations.

James Malone, Managing Director of Label Power, commented on the company's performance saying "I'm absolutely delighted with the top 400 listing and proud of all the staff who have contributed so much this year".

To see a complete listing of the Queensland Q400 why not visit their website at www.q400.com.au.

How did it all start?

The idea of the barcode was first proposed in the US in the late 1960s as a method of automating the input of numbers (or codes) into computer systems.

The supermarkets of the day wanted a way of identifying products as they passed through the stores without the labour of continually typing numbers into a keyboard. This would also speed the movement of goods through the checkout.

This requirement eventually gave rise to the 12 digit UPC (Universal Product Code) barcode, which in turn has been extended to produce the 13 digit WPC (World Product Code), often known by local labels such as EAN-13 (European Article Numbering 13 digit code). These are now widespread, and are being insisted upon by major supermarket chains.

The most common barcodes are produced from a set of bars, and spaces between bars, of varying widths. They have the advantage that barcode scanners can read them easily, even if humans cannot. Normal letters, at which humans are so adept, are still almost impossible for computer scanners to read reliably, even in the case of OCR (Optical Character Recognition) fonts.

The idea of a barcode is to encode an identification number for something that will be unique. Using this unique number in the form of a bar code, the information about the item can be looked up in a database using the code number.

In the case of supermarkets; food products that have been assigned unique EAN barcode/numbers, correspond to the supermarkets own database containing pricing information, stock levels etc. At the checkout the barcode is scanned and the price charged to the customer. In addition the information collected from the scan is used for automatic reordering and a host of other management information about the products they sell.

The most common forms of barcodes are: the UCC/EAN 13 digit codes and a shorter version known as EAN-8, containing only 8 digits; the ITF (Interleaved 2 of 5) barcode; the Code 39 (also known as Code 3 of 9); and the EAN-128, which is a specific form of the Code 128 barcode.

UCC/EAN codes are used primarily for retail applications whereas code 128 with its combination of alpha and numeric content is used for non point of sale applications.

How do I go about barcoding my products?

Your first call should be to Label Power. We will guide you through the process and advise you on the best way to go about barcoding your products. You will also need to contact EAN Australia.

Superior labels for a superior brand

Coupon or leaflet labels as they are sometimes called are multi page folded booklets designed for promotions, competitions or in Kid-edible's case, providing important information about the benefits of eating healthy fruit and vegetables plus a chance to win a fantastic portable DVD player. 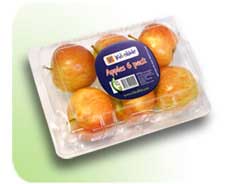 Marketing Manager for C-lect Marketing Solutions, Michelle Christodoulou, was delighted with the product and said she was looking forward to rolling it out interstate over the next few months.

If you would like to know more about coupon labels and the promotional possibilities of this great product please contact andrew@labelpower.com.au.

As part of Label Power's $2.5 million expansion program, we will be relocating to a brand new facility at the end of the year.

In order to accommodate new presses, in-house slitting and our huge range of ex-stock products, we have secured 2,000sqm of factory and warehouse space south of Brisbane.

We will look to achieve a seamless move to our new premises with no interruption in production and a final close down of the West End factory in December.

Watch this space for more information over the coming months.

To order, email websales@labelpower.com.au however be quick as only 1 of each model is available at this pricing!